Warning: "continue" targeting switch is equivalent to "break". Did you mean to use "continue 2"? in /home/mw8zbgrh4phm/domains/theartofwarinitiative.org/html/wp-content/themes/jupiter/framework/includes/minify/src/Minifier.php on line 227
 Pin - The Art of War Initiative
0

he dancing bodhisattva pin exhibited was a gift from Thailand in 2000. The bodhisattva is posed in a form reminiscent of a traditional classical dance called Siam which traces its origins back 500 years. Similar to the way in which Hinduism and Buddhism traveled to Thailand, high quality textiles were imported from India to China and finally to Thailand. Textiles such as silk which was common to the Royal Court and cotton used for common people followed the same path from India to China to Thailand.

The small pin displayed here is made of sterling silver,  a popular metal used in Thailand. Enameled pigments of blue, red, white, and gold adorn this object. The gold of the textile depicted on this bodhisattva was common with gold painted textiles and gold brocades in connection to the elite. A jasmine flower is placed prominently at the center of the chest of this bodhisattva. The floral motif is repeated in smaller form throughout the pin. 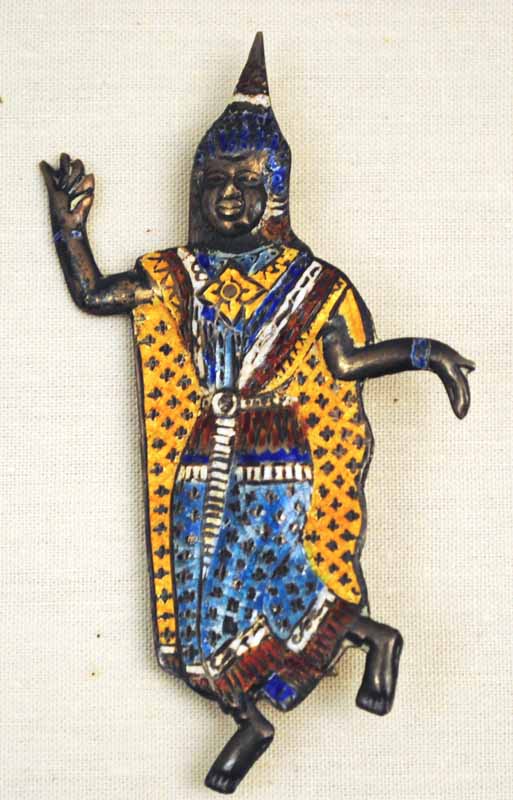